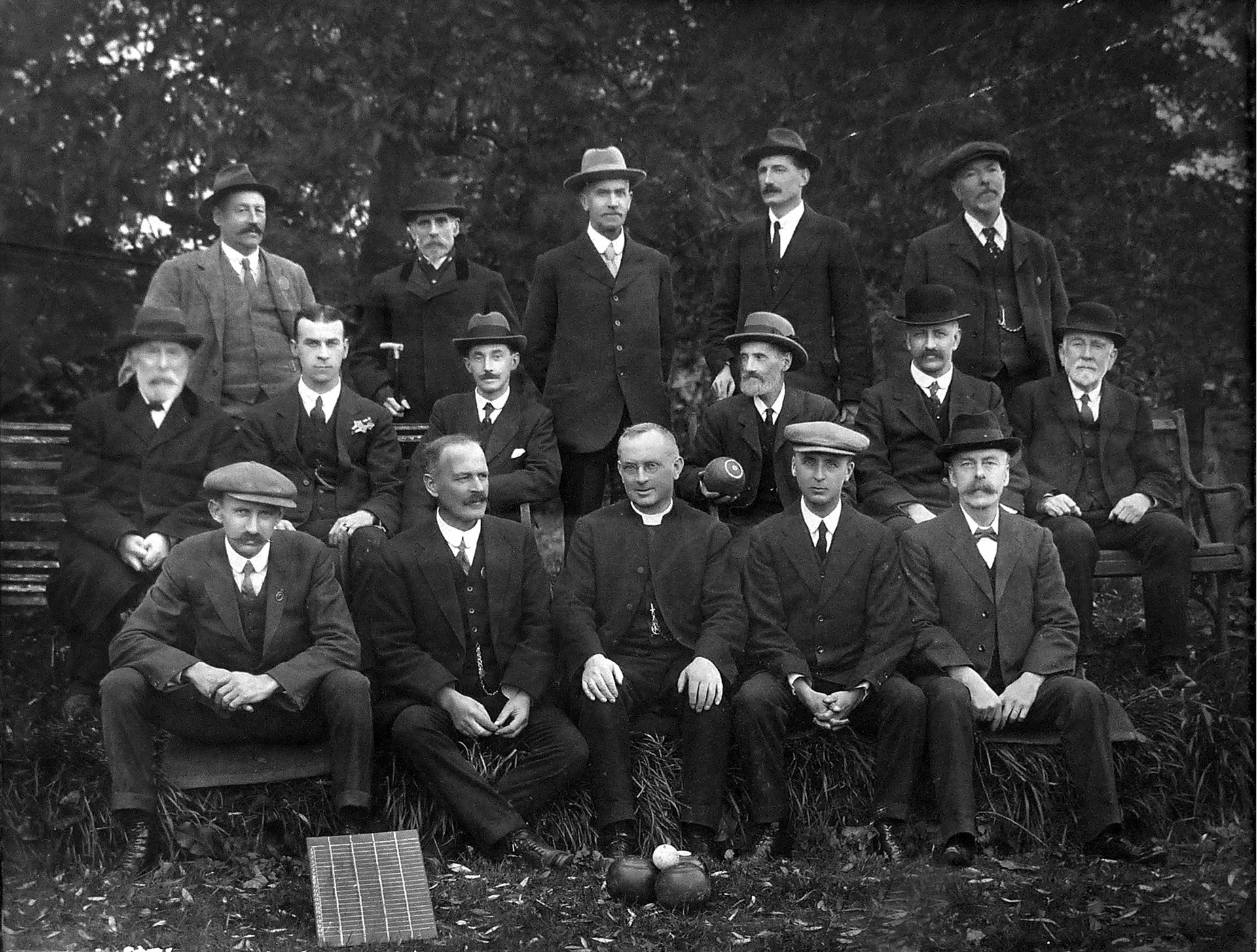 Some of the Founders of the Sudbury Bowls Club

A certain gentleman by the name of Mills arrived in Sudbury to become mine host of the Black Boy Public House on Market Hill, in 2021 the Black Boy was renamed The Lady Elizabeth.  Mills was a very keen bowler and with enthusiastic support from Father Peacock the local Catholic Priest, who together with a few local residents formed the Sudbury Bowls Club.

They rented a piece of land at the bottom of the cricket meadow and started digging out foundations to a depth of two and a half feet, laying a bed of brick bats, a thick layer of sand covered by soil and turf which they obtained from the Acton Lane area.

There was no hedge dividing the bowling green from the cricket ground in those days, so they purchased and used a row of iron hurdles on wheels, as used for sheep pens as the boundary fence.

The green they developed was very small, it has been enlarged twice since those early beginnings.  There were no ditches around the bowling green and the consequence was that many of the woods finished up in the flower beds which were around three sides of the bowling green, many would crash into the row of iron hurdles. and the bowlers did not bowl from anywhere in particular.  Often they would bowl from corner to corner with the lead player casting the jack in which ever direction he fancied at the time.

The bowls they used were old fashioned lawn bowls made from Lignum vitae wood with a large bulge on one side, nails were driven into this bulge to create the bias.

There was no pavilion in the early days, but the bowlers were allowed to use the cricket pavilion.  After a while a pavilion was provided for the club members utilising some old stables which were on the site.  Billy Berry a confectioner in Friars Street and famous for his home-made ice cream was mainly responsible for the acquisition and conversion of these building into a bowls pavilion.

With no groundsman to look after the bowling green, members would do the work themselves and it was not unusual to find a dozen or so on their hands and knees weeding the green.

The club played several games away from Sudbury and the means of transport was a large cart, break or a wagon drawn by two horses.  Mr Hill always looked forward to playing at Bury St Edmunds, where they played in the Abbey Gardens and at the Hadleigh White Hart where there was a crown green.  Here again many of the woods would end up in the flower beds.

Seemingly licensing hours, if any, were very slack and members when playing at the Hadleigh White Hart would carry on drinking well into the small hours, on there way home they would knock up the landlord of the Boxford Fleece for another drink.  It must have been near breakfast time when they arrived back in Sudbury.

There were no bowls bags as such in 1913, therefore all the members woods were thrown loose into the cart or wagon and allowed to roll over the floor.  After an away match it seems nobody arrived home with their own woods which created quite a problem sorting them out. 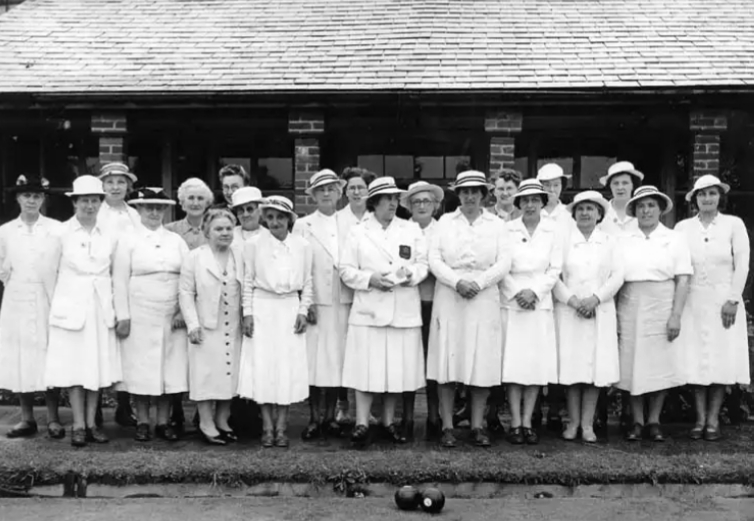 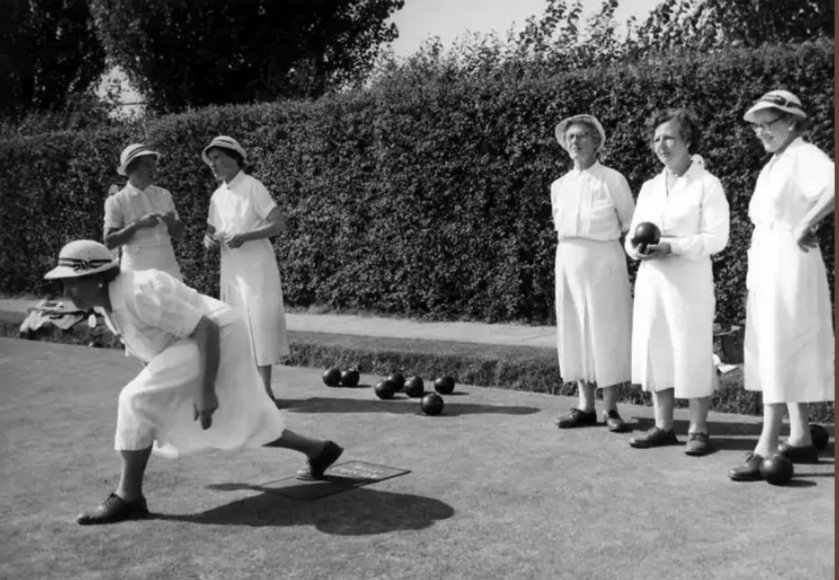 The Harry Gower Pavilion, as it became known was hand fabricated in a barn in Lavenham belonging to Phil D'eath.  Many locals knew the Pavilion as The Tunnel and under the guidance of Harry Gower a local builder, Mr Aldous a carpenter, Owen Howard an electrician and Sudbury Bowls Club members, together with Bert Edwards who played a key role in transporting materials with the help of some unskilled volunteers work began, the pavilion was completed and erected next to the outdoor green at a total cost of  £4,000.

It was opened in October 1970, and bowled beautifully true.  An evening league of 16 rinks (8 matches) a week Monday to Thursday for 30 weeks and an afternoon league of 10 rinks over 5 afternoons were established (5 matches) a week Monday to Thursday were established.  On Sunday mornings there was a drawn pairs competition limited to 16 pairs , followed by a nominated triples, also limited to 16.  Weekend vacant sessions were open to bookings, except when County Competitions took priority and the rink was never empty.

Towards the end of the 70's The Harry Gower Pavilion was replaced with a two rink metal building, which was added to with the construction in 1986 of an additional two rink extension to this original building.

In 2002 contractors were brought in to take out the centre pillars and fill in the central ditches, creating a solid four rink playing surface, this work also involved the purchase of a new indoor carpet and underlay.  This renovation work cost in access of £400,000.

December 2014 three rows of solar panels were added to the roof of the bowls hall, followed in 2017 by the replacement of the fluorescent strip lights with more modern LED lighting resulting in no shadows on the bowling green.

2018 saw a big improvement in the Ladies and Gents changing areas, resulting in a larger and brighter environment to change in.  New modern toilets together with a separate disabled facility, lounge area and office were also created.

March 2020 the club was closed, this was in response to the British Governments lockdown guidance regarding the Covid 19 Global pandemic. 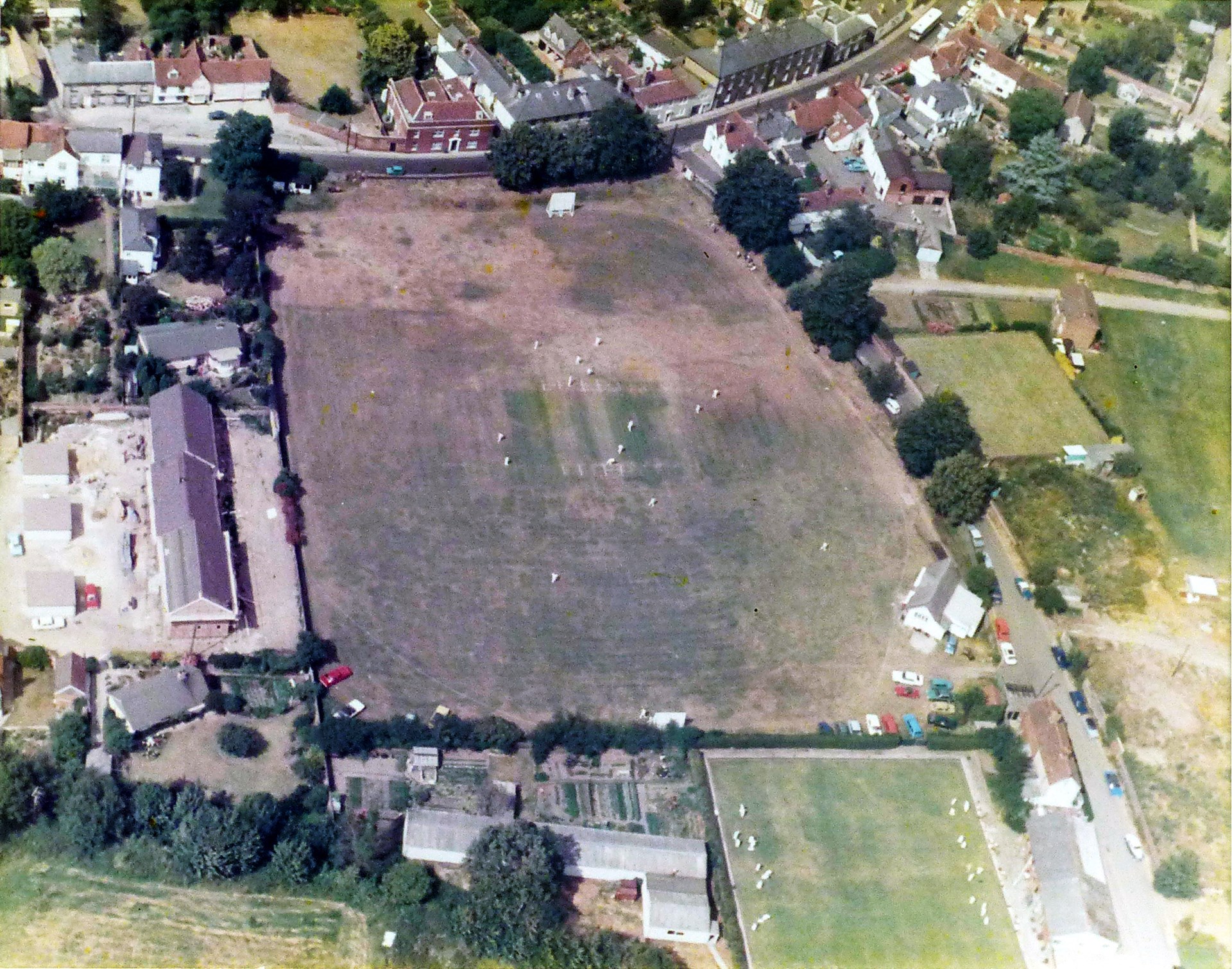 Arial photograph of the Cricket Ground and Bowling Green taken in the early 1970's.

The Indoor single rink building, known as The Tunnel is next to the allotments and cricket ground.

The original bowls pavilion is on the right of the bowls green.

Middle right was the site of The Unity Bowls Club, now the Unity Croquet Club. 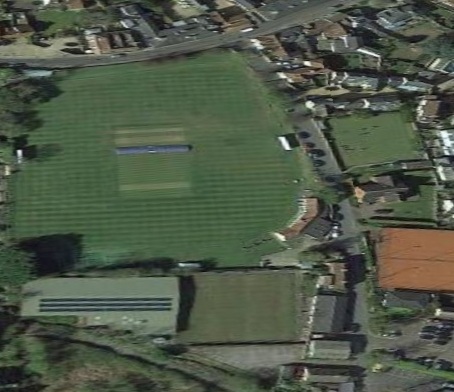